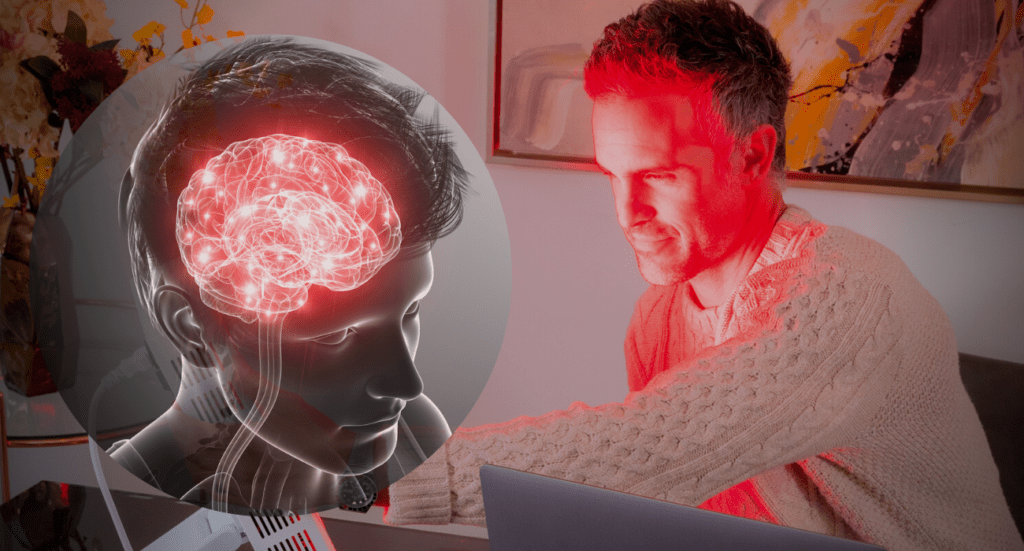 Red light therapy – which is traditionally known for its ability to improve skin health, reduce pain, improve sleep, and improve cellular energy – offers exciting potential as a solution for brain health and brain function, along with showing potential to heal brain-related injuries according to the latest research.

From enhancing your mental sharpness and boosting memory to improving cognitive function, red light therapy can benefit the brain in innumerable ways. Below we will discuss everything you need to know about using red light therapy for your brain along with what the science says.

If you have brain fog, fatigue, poor memory, want neuro-protection from Alzheimer’s, or just want to sharpen your mind; this article is for you.

The Basics of Red Light Therapy.

Red light therapy is a non-invasive light treatment that uses a narrow spectrum of red and near-infrared light wavelengths to produce a biological response in the body. Also known as “photobiomodulation,” red light therapy has been shown to have a stimulating effect on the body, including the brain.

This stimulating effect is part of the reason why red light therapy is being studied right now as a way to improve brain health and even prevent brain-related diseases such as Alzheimer’s and Parkinson’s Disease.

Red light therapy has been around for a long time. The technology was originally developed by NASA in the 1980s and to-date has been studied across hundreds of clinical studies, including some exciting research on brain health.

For the first time, red light therapy is able to be widely used due to breakthroughs in LED lighting technology which has enabled mass consumption and utilization — and we expect this trend to continue as more people (like you) discover the benefits for themselves.

It is truly something you have to experience. Interested? Continue reading below. 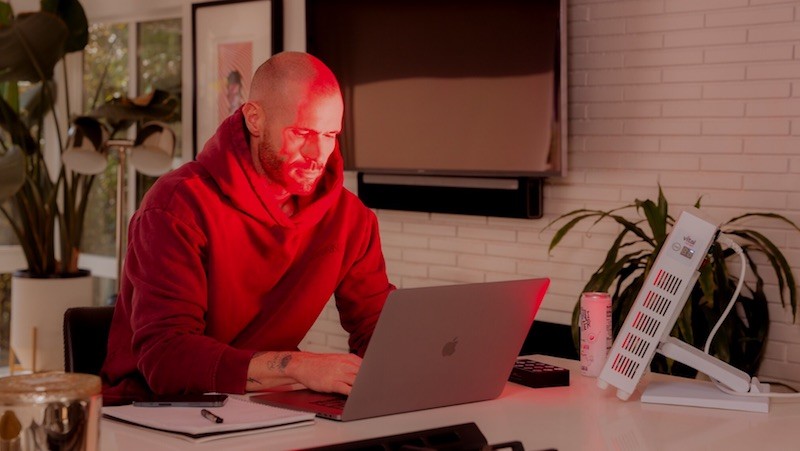 Can Your Brain Really Absorb Light?

The short answer is yes — but let’s look at the science.

In one study, researchers found that red light wavelengths (from 610-670nm, which are the same in a Vital Red Light device) can absorb between 4-5 mm into the body; while near-infrared light wavelengths (from 810-850nm) can absorb between 5 mm to just over 2 inches into the body [1]. This is the depth at which near-infrared light (the same as used in a Vital Red Light therapy device) can penetrate easily through the skull and through the cerebrospinal fluid, before being absorbed into brain tissue.

So yes, your brain can receive the near-infrared wavelengths from a Vital Red Light device. Knowing that, let’s see what happens when your brain receives light from a red light therapy device. 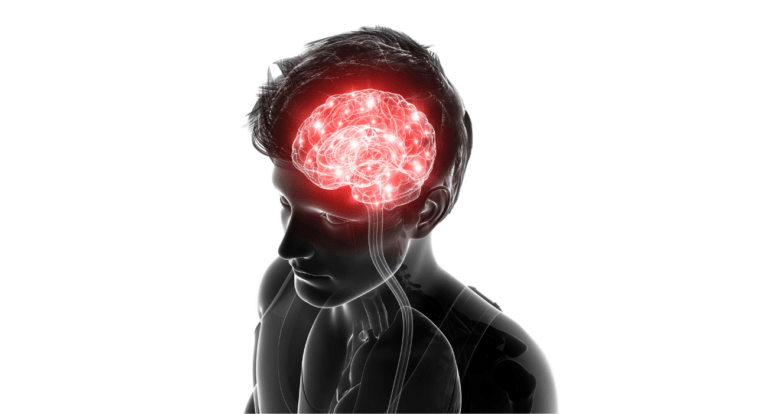 Now that we know that red light can reach your brain, let’s look at what it does.

When red and near-infrared light is absorbed by your cells, it stimulates your mitochondria to function more efficiently. When your body’s mitochondria function efficiently, this leads to a host of health benefits including improved immunity, mood, energy levels, and, most importantly, brain function.

Most of red light therapy’s effects come from your body’s mitochondria absorbing the natural red light. As the red light hits your mitochondria, a cellular respiration process happens. The result of this process is the creation of ATP, or adenosine triphosphate. ATP is to your brain what gasoline is to your car – ATP fuels everything that you do. The more ATP you have, the more energy your cells can make, and thus the more energy you have to repair and heal damaged cells. In short, if your brain is able to produce ATP better, your brain cells will be able to function properly.

And that’s not all. According to the latest research, this reaction that occurs in your body causes a chain reaction in the cells and spurs a cascade of effects such as increased cell formation, movement, cell death, and decreased inflammation [2]. These are all important components of brain health and function.

Below is a helpful image of the science in action. 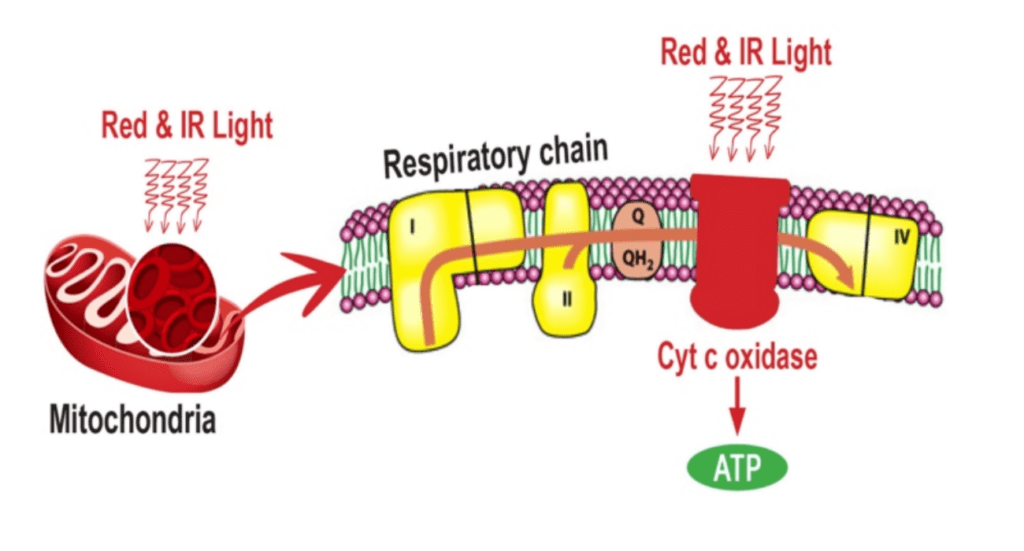 Unlike conventional treatments that use drugs or surgery to address symptoms of a problem, red light therapy targets the source of the issue — your body’s cells — which creates lasting change in the body. Red light therapy is about getting to the root cause of cellular dysfunction to produce lasting health benefits that you can see and feel.

The key ways the red light helps the brain is as follows:

Let’s break these down below.

1. Neuroprotection for Parkinson’s, Alzheimer’s, and More

Neuroprotection refers to mechanisms and strategies that aim to protect the nervous system (and brain) from injury and damage. A 2019 study focused on using red light for Alzheimer’s disease showed that red light helps with neuroprotection, which safeguards survival and longevity by slowing abnormal cell death due to inflammation [4]. Using red light could potentially fortify your brain from serious diseases that affect millions.

Mitochondrial dysfunction has been shown in various clinical studies to be a direct cause of Alzheimer’s disease and Parkinson’s disease. Mitochondrial dysfunction simply means that your cells are not able to produce energy, so they become susceptible to disease or just are not working optimally. Red and near-infrared light helps to stimulate the body’s mitochondria to produce more ATP energy (as we talked about above). ATP is the primary fuel for cells, which they use to function more efficiently. Red light provides a source of energy for your cells which enables better cell functioning.

3. Improved Blood Flow to the Brain

Anytime there is damage to skin cells or neurons (brain cells), promoting blood flow is a primary way to accelerate the healing process. Red light has been shown in various studies to stimulate cerebral blood flow (blood flow to the brain) while increasing brain oxygenation in Alzheimer’s patients [7].

Chronic inflammation is widely recognized as a major contributor to all chronic diseases including heart disease, Alzheimer’s disease, fibromyalgia, depression, chronic fatigue syndrome, and many more [8].

Red and near-infrared wavelengths of light have been shown to reduce the root cause of inflammation, which is oxidative stress and increased free radicals.

Stem cells are where specialized cells such as brain cells, blood cells, heart muscle cells, and bone cells come from.

When stem cells are exposed to red and infrared light, they become activated. They are then able to travel through the bloodstream to the injured area of the body, including the brain. When stem cells arrive to the site of injury, they transform themselves into the needed cell type to help with healing. One study found red and infrared light effectively activates stem cells in the bone marrow, thus, assisting in the healing process [9]. 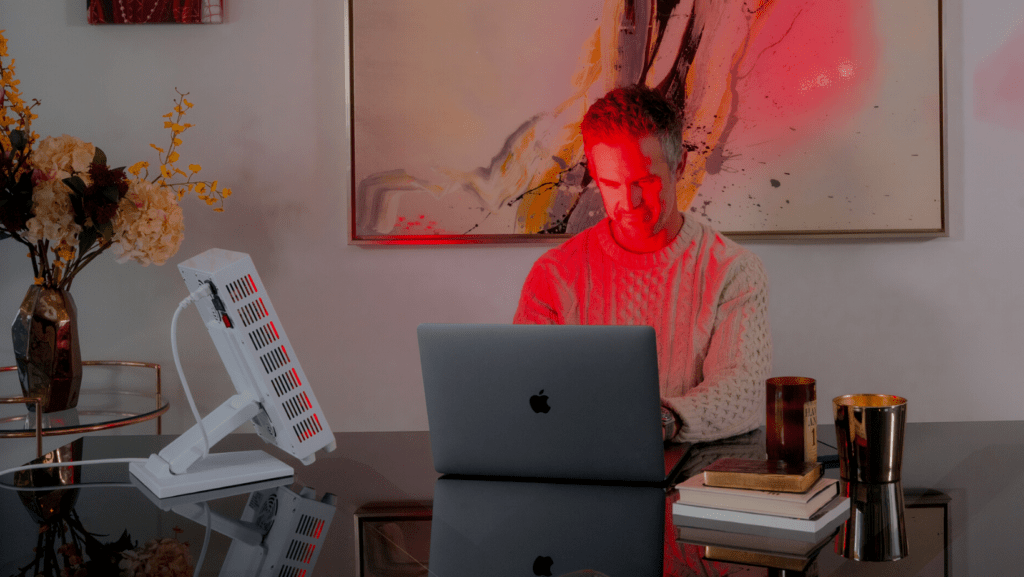 The Benefits of Red Light for Your Brain

Some of the benefits that show the most potential are as follows: 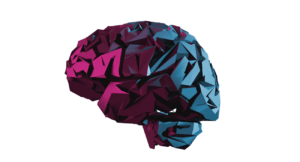 One aspect of human health that red light therapy has been shown to improve drastically is brain health, or cognitive performance. Cognition primarily refers to things like memory, the ability to learn new information, speech, and reading comprehension.

In most healthy individuals, the brain is capable of learning new skills in each of these areas, especially in early childhood, and it is also capable of developing personal and individual thoughts about the world. Factors such as aging and disease may affect cognitive function over time, resulting in issues like memory loss and trouble thinking of the right words while speaking or writing.

The Best Time to Use Red Light

Using red light therapy in the morning will make your mind sharp and head clear. New research is also showing how shining red light on your head and brain cells may improve cognitive functions like memory and executive function [11].

The study (sourced below) shows that people were able to perform difficult tests with less cognitive effort and difficulty while performing tasks that require more brain power easier. Another study found that red and near-infrared light therapy also increased executive cognitive function in young healthy adults, providing hope that further studies may discover that red and near-infrared light therapy can provide a hopeful treatment in the fight against Alzheimer’s disease, as well as prevention. [10]

How To Use Red Light for Brain Health

Today, LED red light therapy devices are delivered via low-risk devices, such as panels. A medical-grade at-home device, when used consistently, can potentially replicate some of the clinical results we saw above. Please note that red light is not supposed to be meant as a cure — rather a tool to accelerate healing or boost brain function.

The many promising benefits of red light therapy make giving it a try worth it. Although not a “cure-all,” you could experience a powerful ripple effect on your body’s self-healing mechanisms. Shining your Vital Red Light device directly on your forehead (while wearing our protective glasses) is most preferred.

A 10-minute session several times a week could stimulate neurons and reduce inflammation on an ongoing basis, and could gradually lead to significant improvements in neuronal functioning. Since red light therapy is considered safe for long-term use, you can use this type of device on an ongoing basis to keep your mind sharp.

If you are ready to get started today, check out Vital Red Light’s Vital Pro which delivers red and near-infrared. 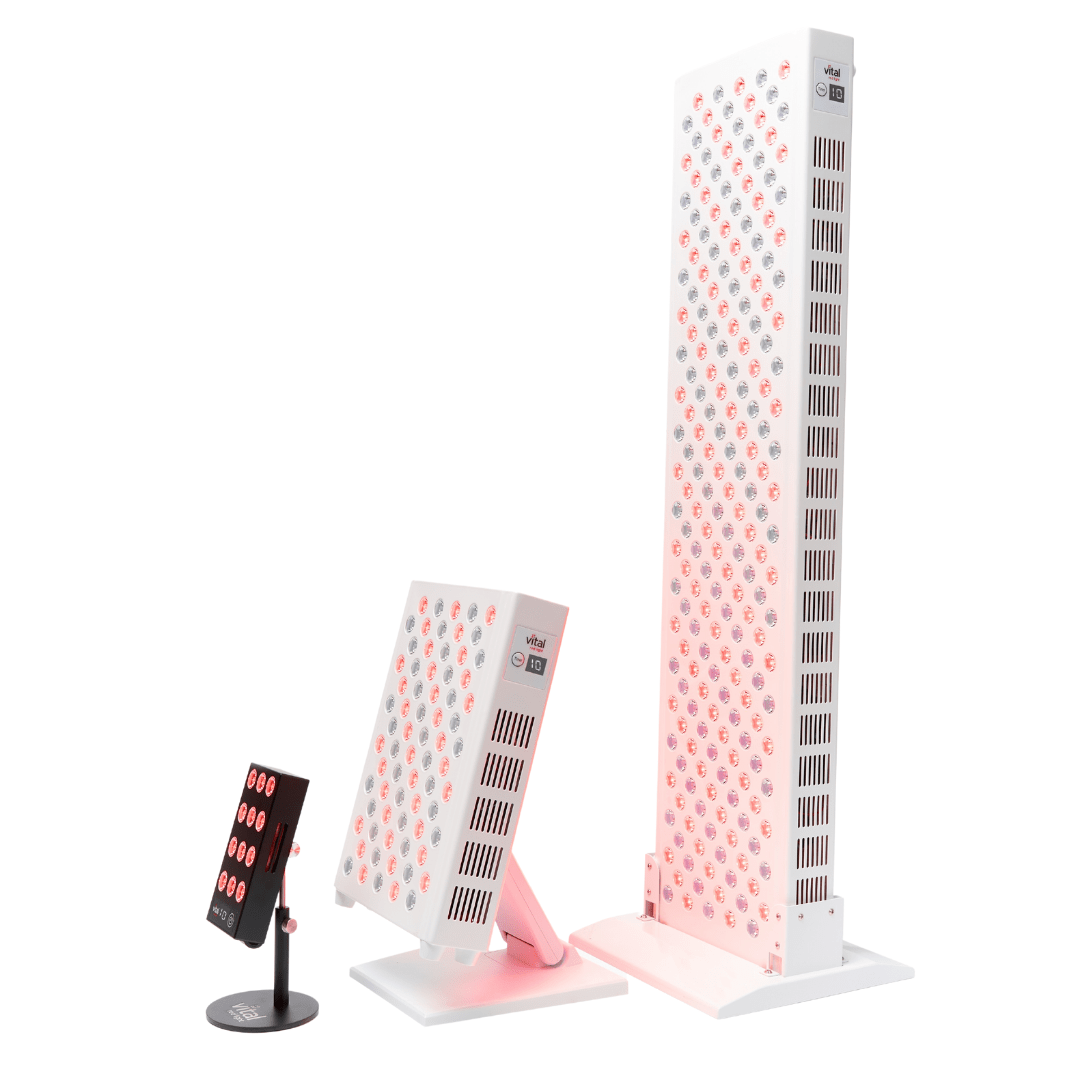 Choosing The Best Device For You

Ready to get started on your path to better brain health? Check out the Vital Pro. Our best-selling device for brain health.

Why Use Red Light Therapy?

[3] From the BetaPlus Center for Reproductive Medicine. “Continuous Compared with Cyclic Oral Contraceptives for the … : Obstetrics & Gynecology.” LWW,

We use cookies on our website to give you the most relevant experience by remembering your preferences and repeat visits. By clicking “Accept All”, you consent to the use of ALL the cookies. However, you may visit "Cookie Settings" to provide a controlled consent.
Cookie SettingsAccept All
Manage consent

This website uses cookies to improve your experience while you navigate through the website. Out of these, the cookies that are categorized as necessary are stored on your browser as they are essential for the working of basic functionalities of the website. We also use third-party cookies that help us analyze and understand how you use this website. These cookies will be stored in your browser only with your consent. You also have the option to opt-out of these cookies. But opting out of some of these cookies may affect your browsing experience.
Necessary Always Enabled
Necessary cookies are absolutely essential for the website to function properly. These cookies ensure basic functionalities and security features of the website, anonymously.
Functional
Functional cookies help to perform certain functionalities like sharing the content of the website on social media platforms, collect feedbacks, and other third-party features.
Performance
Performance cookies are used to understand and analyze the key performance indexes of the website which helps in delivering a better user experience for the visitors.
Analytics
Analytical cookies are used to understand how visitors interact with the website. These cookies help provide information on metrics the number of visitors, bounce rate, traffic source, etc.
Advertisement
Advertisement cookies are used to provide visitors with relevant ads and marketing campaigns. These cookies track visitors across websites and collect information to provide customized ads.
Others
Other uncategorized cookies are those that are being analyzed and have not been classified into a category as yet.
SAVE & ACCEPT
Menu 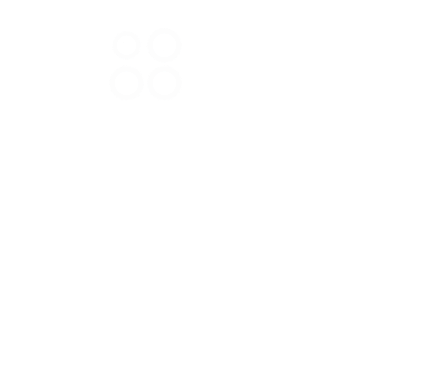